Ofloxacin (OFX) and moxifloxacin (MOX) are the most promising second line drugs for tuberculosis treatment. Although the primary mechanism of action of OFX and MOX is gyrase inhibition, other possible mechanisms cannot be ruled out. Being the functional moiety of cell, the proteins act as primary targets for developing drugs, diagnostics and therapeutics. In this study we have investigated the proteomic changes of Mycobacterium tuberculosis isolates induced by OFX and MOX by applying comparative proteomic approaches based on two-dinensional gel electrophoresis (2DE) along with matrix assisted laser desorption ionisation time of flight mass spectrometry (MALDI TOF/TOF-MS) and bioinformatic tools. The findings are likely to provide new understanding of OFX and MOX mechanisms that might be helpful in exploring new diagnostics and drug targets. Our study explored eleven proteins (Rv2889c, Rv2623, Rv0952, Rv1827, Rv1932, Rv0054, Rv1080c, Rv3418c, Rv3914, Rv1636 and Rv0009) that were overexpressed in the presence of drugs. Among them, Rv2623, Rv1827 and Rv1636 were identified as proteins with unknown function. InterProScan and molecular docking revealed that the conserved domain of hypothetical proteins interact with OFX and MOX which indicate a probable inhibition/modulation of the functioning of these proteins by both drugs, which might be overexpressed to overcome this effect. 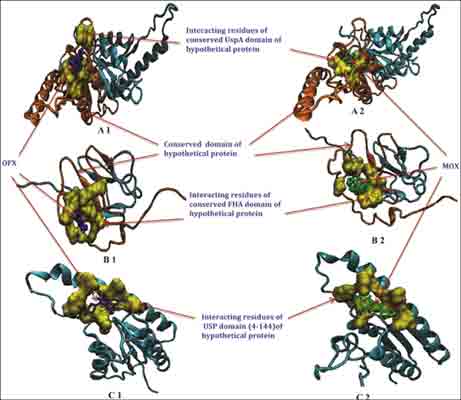