An endo-pectate lyase (PL1B) of family 1 polysaccharide lyase from Clostridium thermocellum was structurally characterized and its stability under chaotropic agent was determined. The putative domain PL1B was identified from the protein sequence ABN53381.1 belonging to superfamily 3 of pectate lyase. Multiple sequence alignment of PL1B with other known pectate lyases revealed the conserved and semi-conserved residues. The secondary structure of PL1B predicted by PsiPred and confirmed by Circular Dichroism showed the presence of 2 α-helices (2.06%), 26 β-strands (40.54%) and 29 random coils (57.4%). The modelled protein represented right handed parallel β-helix structure, where three parallel β -sheets linked by loops coils around to form the β-helix core. Quality assessment of energy minimized structure by Ramachandran plot displayed 82.8% residues in favoured region. Superposition of PL1B structure with Bsp165-PelA from Bacillus sp. revealed the substrate binding cleft formed by the amino acid residues from the loops and β-sheet. Molecular dynamic simulation of modelled PL1B structure inferred that it is quite stable and compact. Docking studies identified Asp151, Arg209, Asn234, Arg236, Tyr271 and Ser272 as the key residues of PL1B involved during catalysis. Among them Arg209 is responsible for proton abstraction during β-elimination. Protein melting studies on PL1B showed that there was 12°C shift of peak from 74 to 86°C in presence of 0.6 mM Ca2+ ions, showing that they provide stability to the structure. The unfolding of PL1B by GuHCl or Urea by fluorescence study showed that the protein structure is stable and disintegrates at their higher concentrations. 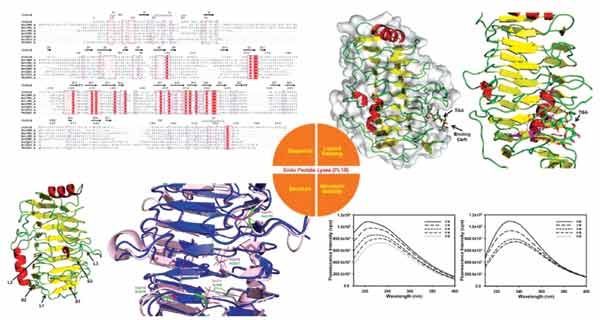