Functions of Polo-Like Kinases: A Journey From Yeast To Humans


Polo-like kinases (PLKs) belong to the serine/threonine kinase subfamily, characterized by the presence of the signature motif called Polo-box domain. PLK members studied so far have emerged as the conserved regulator of cell cycle and cell division in eukaryotes. The Polo-box domain adds diversity to PLK functions by targeting the enzyme to an array of substrates found at different sub-cellular structures for exquisite regulation of cell cycle. More than a dozen members of PLK subfamily have been identified in the eukaryotic world except in the higher plants. Despite the similarities in governing cell division, PLKs have diverse and unique functions in different organisms. This review summarizes the plethora of functions of PLK in yeast to humans. Along with its classical functions, this review also emphasizes on the role of PLKs in regulating DNA replication, repair, genome integrity, development, and morphogenesis pathways. Perturbations in PLK functions have disease implications, such as cancer in humans, and thus human PLK1 is targeted for cancer therapeutics. PLKs also play a vital role in regulating several stages of meiotic cell division. Thus, PLKs are emerging as a unique class of proteins with multiple and diverse functions in different organisms. 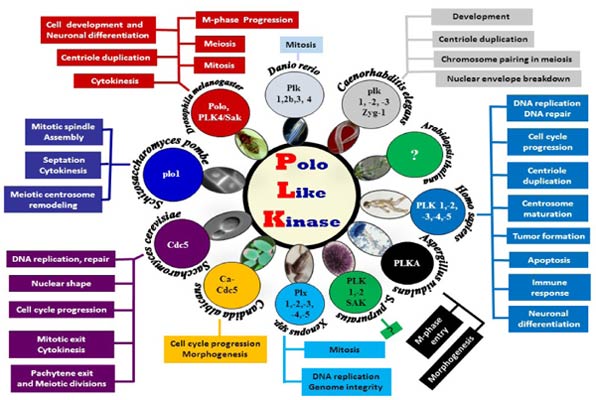