Evaluating the Potential of Oleaginous Yeasts as Feedstock for Biodiesel Production


Background: Lipid-producing microorganisms, said to be oleaginous have been recognized since several years. We had investigated the effects of medium components and culturing situations on cell growth and lipid accumulation of oleaginous yeasts which were analytically examined so as to enhance lipid yield for biodiesel production.

Objective: The main objective of this study was to explore oleaginous yeast, Yarrowia lipolytica isolated from soil and optimization of culture conditions and medium components to obtained better quality microbial oil for biodiesel production.

Results: The isolate IIB-10 identified as Yarrowia lipolytica produced maximum amount of lipids i.e. 22.8%. More amount of biomass was obtained when cane molasses was utilized as carbon source where it produced 29.4 g/L of biomass while sucrose and lactose were not utilized by IIB-10 and no biomass was obtained. Similarly, meat extracts showed best results when it was used as nitrogen source because it resulted in 35.8 g/L biomass of Yarrowia lipolytica IIB-10. The culturing conditions like size of inoculum, effect of pH and time of incubation were also studied. The 10% of inoculum size produced 25.4 g/L biomass at 120 h incubation time, while the pH 7 was the optimum pH at which 24.8 g/L biomass was produced by Yarrowia lipolytica IIB-10. GC-MS analysis showed that biodiesel produced by transesterification contained similar fatty acids as found in vegetable oil for this reason it is widely accepted feedstock for biodiesel production.

Conclusion: The analysis of fatty acids methyl esters showed the similar composition of microbial oil as in vegetable oils and high amount of methyl esters were obtained after transesterification. Therefore, potentially oleaginous yeast could be used to generate a large amount of lipids for biodiesel production that will be the better substitute of petroleum-based diesel and will also control the environmental pollution. 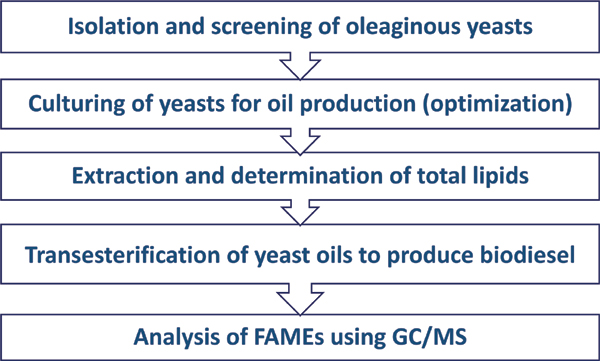