Background: Cellulose represents a major source of fermentable sugars in lignocellulosic biomass and a combined action of hydrolytic enzymes (exoglucanases , endoglucanases and β-glucosidases) is required to effectively convert cellulose to glucose that can be fermented to bio-ethanol. However, in-order to make the production of bio-ethanol an economically feasible process, the costs of the enzymes to be used for hydrolysis of the raw material need to be reduced and an increase in specific activity or production efficiency of cellulases is required. Among the cellulases, β-glucosidase not only hydrolyzes cellobiose to glucose but it also reduces the cellobiose inhibition, resulting in efficient functioning of endo- and exo-glucanases. Therefore, in the current study kinetic and thermodynamic characteristics of highly active β-glucosidase from randomly mutated Aspergillus niger NIBGE-06 have been evaluated for its industrial applications.

Objective: The main objective of this study was the identification of mutations and determination of their effect on the physiochemical, kinetic and thermodynamic characteristics of β-glucosidase activity and stability.

Methods: Pure cultures of Aspergillus niger NIBGE and its 2-Deoxy-D-glucose resistant γ-rays mutant Aspergillus niger NIBGE-06 were grown on Vogel's medium containing wheat bran (3% w/v), at 30±1 °C for 96-108 h. Crude enzymes from both strains were subjected to ammonium sulfate precipitation and column chromatography on Fast Protein Liquid Chromatography (FPLC) system. The purified β-glucosidases from both fungal sources were characterized for their native and subunit molecular mass through FPLC and SDS-PAGE, respectively. The purified enzymes were then comparatively characterized for their optimum temperature, activation energy (Ea), temperature quotient (Q10), Optimum pH, Heat of ionization (ΔHI) of active site residues , Michaelis-Menten constants (Vmax, Km, kcat and kcat/Km) and thermodynamics of irreversible inactivation through various enzyme assays. The genomic DNA from both fungal strains was also extracted by SDS-method and full length β- glucosidase genes (bgl) were amplified through PCR. The PCR products were cloned in TA cloning vector followed by the sequencing of potentially full length clones using the commercial services of Macrogen, Korea. The in silico analyses of the sequences thus obtained were also performed using various online tools such as blastn, blastp, GeneWise, SignalP, Inter- ProScan.

Results: The extracellular β-glucosidases (BGL) from both fungal sources were purified to homogeneity level by ammonium sulfate precipitation and FPLC system. The BGLs from both strains were dimeric in nature, with subunit and native molecular masses of 130 kDa and 252 kDa, respectively. The comparative analysis of nucleotides of bgl genes revealed 8 point mutations. Significant improvement was observed in the kinetic properties of the mutant BGL relative to the wild type enzyme. Arrhenius plot for energy of activation (Ea) showed a biphasic trend and ES-complex formation required Ea of 50 and 42 kJ mol-1 by BGL from parent and mutant, respectively. The pKa1 and pKa2 of the active site residues were 3.4 & 5.5 and 3.2 & 5.6, respectively. The heat of ionization for the acidic limb (ΔHI-AL) and the basic limb (ΔHI-BL) of BGL from both strains were equal to 56 & 41 and 71 & 45 kJ mol-1, respectively. Kinetic constants of cellobiose hydrolysis for BGL from both strains were determined as follows: kcat = 2,589 and 4,135 s-1, Km = 0.24 and 0.26 mM cellobiose, kcat/Km = 10,872 and 15,712 s-1 mM-1 cellobiose, respectively. Thermodynamic parameters for cellobiose hydrolysis also suggested that mutant BGL is more efficient compared to the parent enzyme. Comparative analysis of Ea(d), ΔH* and ΔG* for irreversible thermostability indicated that the thermostabilization of mutant enzyme was due to higher functional energy (free energy), which enabled the enzyme to resist against unfolding of its transition state.

Conclusion: Physiochemical and thermodynamic characterization of extracellular β-glucosidases (BGL) from 2-Deoxy-Dglucose resistant mutant derivative of A. niger showed that mutagenesis did not greatly affect the physiochemical properties of the BGL enzyme, like temperature optima, pH optima and molecular mass, while the catalytic efficiency for cellobiose hydrolysis was significantly improved (High kcat and kcat/Km). Furthermore, the mutant BGL was more thermostable than the parent enzyme. This shows that random mutagenesis has changed the BGL structural gene, resulting in improvement within its stability- function characteristics. Hence, directed evolution or random mutagenesis with careful selection can result in the engineering of highly efficient enzymes for intended industrial applications. 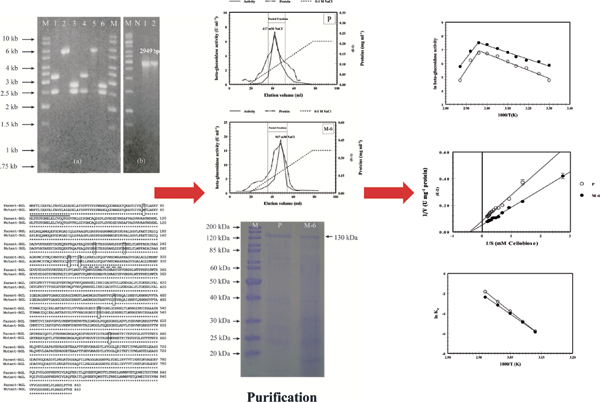