Background: The 5HT2A G-Protein Coupled Receptor (GPCR) is an important family of receptors involved in an array of neuromodulatory functions. Their dysregulation has been implicated in a number of psychiatric diseases. In spite of the importance of this GPCR, high resolution structure and mechanistic details of its function is unknown. Cholesterol plays an important role in the function of many receptors and reduced cholesterol levels can lead to disruption of serotonergic pathways. However, the role of cholesterol in the formation of GPCR oligomers has not been previously shown for this receptor. Given that receptor dimers have been shown to be the functional unit of this receptor, it is important to investigate the effect of cholesterol in the oligomeric state of 5HT2A receptor.

Objectives: The main objective of this work is to clone, over-express and purify the 5HT2A receptor and investigate the effect of cholesterol in its oligomer formation.

Methods: The 5HT2A receptor (5HT2AR) DNA construct was subcloned into pFastBac-HT vector and the purified bacmid was used to transfect healthy Sf9 cells. After subsequent passages, a high titer baculovirus was used for over-expression in Sf9 cells. To verify whether the over-expressed receptor was localized in the membrane or cytosolic fraction, cells with and without baculoviral infection were analyzed by immunocytochemistry. Subsequently, the over-expression conditions required to obtain sufficient quantity of the receptor was optimized followed by the optimization of the purification conditions. Finally, the culture was scaled up and the receptor was purified by affinity chromatography. The over-expression of the receptor was checked by Western blotting and purity was analyzed by Coomassie stained SDS PAGE. Cryo-electron microscopy experiments were performed on the purified receptor in presence and absence of cholesterol and at multiple concentrations to rule out any concentration dependent effect on the oligomer formation.

Results: Immunocytochemistry experiments showed prominent nuclear staining; however, bright green staining along the cell membrane was observed only for the infected cells, suggesting appropriate trafficking of majority of the over-expressed receptors to the cell membrane. Results of cryoelectron microscopy show that the receptor with cholesterol had particles that were bigger in size (~11 – 12 nm) compared to the dimension of known GPCR homologs. In contrast, the receptor after removal of cholesterol revealed a uniform distribution of smaller particles (~5 – 6 nm) that is approximately half the size of 5HT2AR particles with cholesterol. Comparing the 2D average views of detergent-encapsulated 5HT2AR particles with the overall dimensions of other 5HT receptor analogs, we show that while a 5HT2AR dimer more closely matches the dimensions of particles with CHS, only a monomer can be fit to particles without CHS. Importantly, even at higher receptor concentration and particle density, the size for 5HT2AR particles without CHS remains the same, suggesting that dimerization is unlikely an effect of concentration.

Conclusion: Our results indicated that 5HT2A receptor primarily forms a dimer in presence of cholesterol whereas it predominantly forms a monomer when cholesterol is removed. 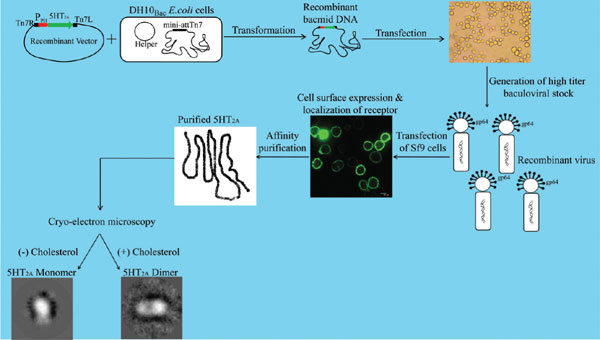