Quantum Dots as Promising Theranostic Tools Against Amyloidosis: A Review


Amyloids are highly ordered beta sheet rich stable protein aggregates, which have been found to play a significant role in the onset of several degenerative diseases such as Alzheimer’s disease, Huntington’s disease, Parkinson’s disease, Type II diabetes mellitus and so on. Aggregation of proteins leading to amyloid fibril formation via intermediate(s), is thought to be a nucleated condensation polymerization process associated with many pathological conditions. There has been extensive research to identify inhibitors of these disease oriented aggregation processes. In recent times, quantum dots, with their unique physico-chemical properties have grabbed the attention of scientific community due to its applications in medical sciences. Quantum dots are nano-particles usually made of semiconductor materials which emit fluorescence upon radiation. The wavelength of fluorescence emission varies with changes in size of quantum dots. Several studies have reported significant inhibitory effects of these quantum dots towards amyloidogenesis, thereby presenting themselves as promising candidates against amyloidosis. Further, studies have also revealed amyloid detection capacity of quantum dots with sensitivity and specificity better than conventional probes. In the current review, we will discuss the various effects of quantum dots on protein aggregation pathways, their mechanism of actions and their potentials as effective therapeutics against amyloidosis. 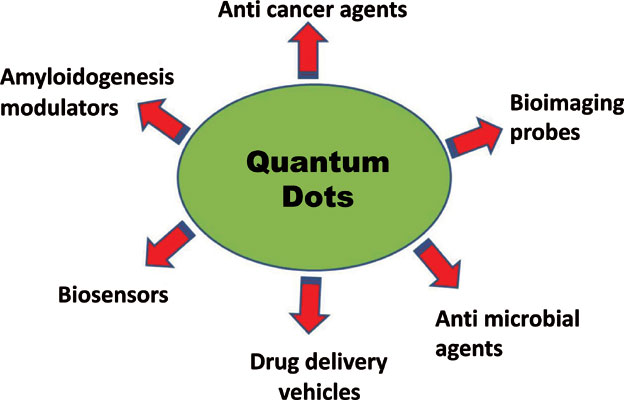