Background: Human proteome contains a plethora of short linear peptide motifs that is crucial for signaling and other cellular processes. These motifs are difficult to identify due to lack of systematic approach for their detection.

Objectives: Here we demonstrate the use of peptide phage display in combination with high throughput next generation sequencing to identify enriched peptide sequences through biopanning process against polo box domain (PBD) of mitotic polo like kinase 1 (Plk1).

Results: Proteomic peptide phage display along with next generation sequencing and Bioinformatics analysis demonstrated several known and putative novel interactions which were potentially related to Plk1-PBD. With our strategy, we were able to identify and characterize several Plk1-PBD binding peptides, as well as define more precisely, consensus sequences.

Conclusion: We believe that this information could provide valuable tools for exploring novel interaction involved in Plk1 signaling as well as to choose peptides for Plk1 specific drug development. 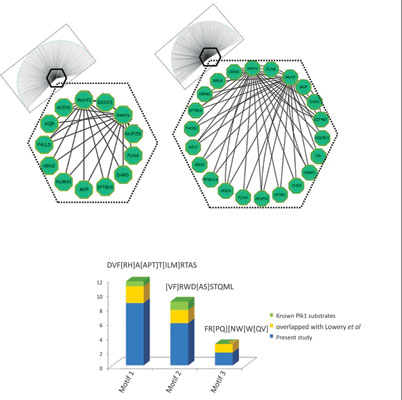