The most recent decade was described by a developing awareness about the seriousness of dementia in the field of age-related people. Among the dementias, Alzheimer's assumes a plentiful role as a result of its amazingly high rate and casualty. A few pharmacological procedures have been attempted yet at the same time now, Alzheimer continues being an untreatable malady. The collection of Aβ in the brain is an early poisonous occasion in the pathogenesis of Alzheimer's disease, which is the most widely recognized type of dementia correlated with plaques and tangles within the brain. However, the mechanism of the intraneuronal direction of BACE1 is poorly understood. AD is caused by mutations in one of the genes that encoding APP, presenilins 1 and 2. Most of the mutations in these genes increase Aβ42 production. Numerous receptors are associated with initiating Aβ transport and clearance. Among them, RAGE is an influx transport receptor that binds soluble Aβ and mediates pathophysiological cellular responses. RAGE additionally intervenes the vehicle of plasma Aβ over the blood-brain barrier. LRP-1 functions as a clearance receptor for Aβ at the blood-brain barrier. The regulation of beta-secretase movement is being explored as a potential restorative focus for treating AD. 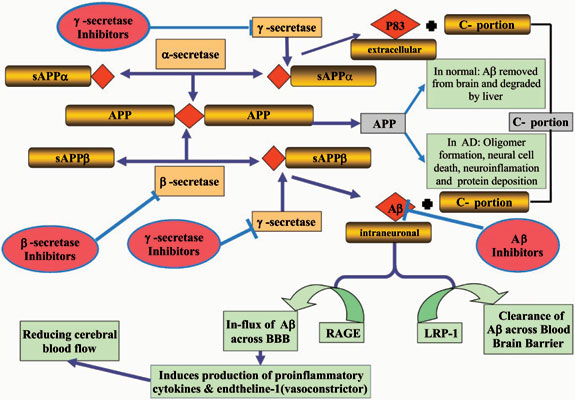