Interaction of Cu+2 with α-Crystallin: A Biophysical and Mass Spectrometric Study


Background: αA- and αB- crystallin are members of small heat shock protein family with chaperone property. Their interactions with Cu2+ ions are reported in neurodegenerative diseases. We have been studying the effect of small ionic molecules on the stability of α-crystallin. Cu2+ is co-ordinated with αB-crystallin involving three histidine residues and one aspartic acid residue as potential binding sites. However, copper binding sites for the oligomeric native protein αA-crystallin protein is not known.

Objective: The objective of this study was to study oligomerization and stability of αA- and αBcrystallin in presence and absence of Cu2+ ions and to find binding sites of Cu2+ on αA-crystallin.

Methods: The recombinant Human αA- and αB-crystallin proteins were purified after overexpression from the E. coli BL21DE3 cell lysate by a combination of ion-exchange and gel filtration chromatography. Mass analysis of αA- and αB-crystallin in absence and presence of Cu2+ were carried out by MALDI TOF MS. Stability of αA-crystallin in presence and absence of Cu2+ was determined by equilibrium urea denaturation experiments. The equilibrium urea unfolding profiles of the αA-crystallin in absence and presence of different Cu2+ concentrations were fitted according to the three state model of protein unfolding. Dynamic Light Scattering (DLS) measurements were carried out to detect the oligomeric size of αA-crystallin in presence and absence of Cu2+ during urea unfolding. Histidine residues were modified by DEPC (Diethyl pyro carbonate). Chemically modified and unmodified αA-crystallin was digested by trypsin prior to MALDI MS analysis. Cu2+ pre-incubation was done before the chemical modification. 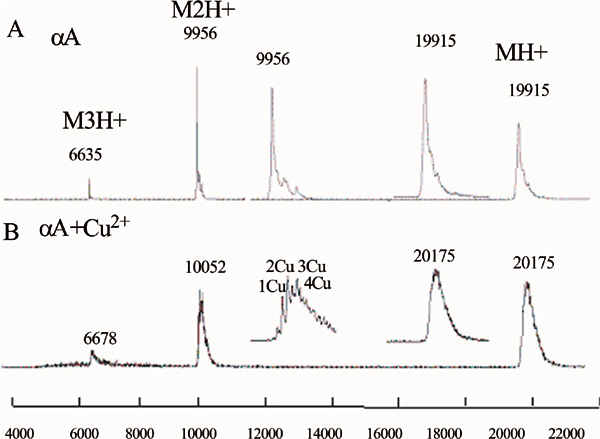