Background: The transesterification of high oleic palm oil methyl ester (HOPME) with neopentyl glycol (NPG) has been investigated. The present study revealed the application of low-pressure technology as a new synthesis method to produce NPG diesters. Single variable optimization and response surface methodology (RSM) were implemented to optimize the experimental conditions to achieve the maximum composition (wt%) of NPG diesters.

Objective: The main objective of this study was to optimize the production of NPG diesters and to characterize the optimized esters with typical chemical, physical and electrical properties to study its potential as insulating oil.

Methods: The transesterification reaction between HOPME and NPG was conducted in a 1L three-neck flask reactor at specified temperature, pressure, molar ratio and catalyst concentration.

For the optimization, four factors have been studied and the diester product was characterized by using gas chromatography (GC) analysis. The synthesized esters were then characterized with typical properties of transformer oil such as flash point, pour point, viscosity and breakdown voltage and were compared with mineral insulating oil and commercial NPG dioleate. For formulation, different samples of NPG diesters with different concentration of pour point depressant were prepared and each sample was tested for its pour point measurement.

Results: The optimum conditions inferred from the analyses were: molar ratio of HOPME to NPG of 2:1.3, temperature = 182°C, pressure = 0.6 mbar and catalyst concentration of 1.2%. The synthesized NPG diesters showed very important improvement in fire safety compared to mineral oil with flash point of 300°C and 155°C, respectively. NPG diesters also exhibit a relatively good viscosity of 21 cSt. The most striking observation to emerge from the data comparison with NPG diester was the breakdown voltage, which was higher than mineral oil and definitely in conformance to the IEC 61099 limit at 67.5 kV. The formulation of synthesized NPD diesters with VISCOPLEX® pour point depressant has successfully increased the pour point of NPG diester from -14°C to -48°C.

Conclusion: The reaction time for the transesterification of HOPME with NPG to produce NPG diester was successfully reduced to 1 hour from the 14 hours required in the earlier synthesis method. The main highlight of this study was the excess reactant which is no longer methyl ester but the alcohol (NPG). The optimum reaction conditions for the synthesis were molar ratio of 2:1.13 for NPG:HOPME, 182°C, 0.6 mbar and catalyst concentration of 1.2 wt%. The maximum NPG diester yield of 87 wt% was consistent with the predicted yield of 87.7 wt% obtained from RSM. The synthesized diester exhibited better insulating properties than the commercial products especially with regards to the breakdown voltage, flash point and moisture content. 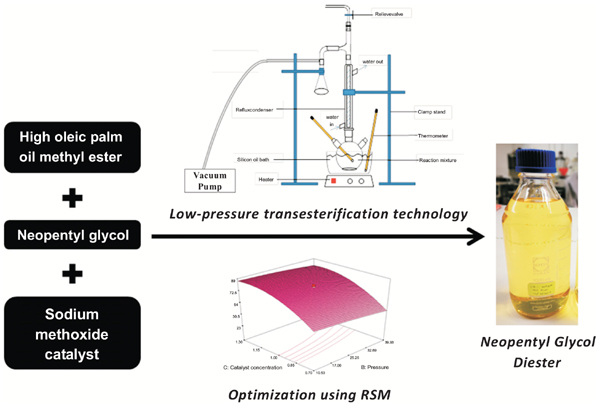