In recent years, microalgae have emerged as an alternative platform for large-scale production of recombinant proteins for different commercial applications. As a production platform, it has several advantages, including rapid growth, easily scale up and ability to grow with or without the external carbon source. Genetic transformation of several species has been established. Of these, Chlamydomonas reinhardtii has become significantly attractive for its potential to express foreign proteins inexpensively. All its three genomes – nuclear, mitochondrial and chloroplastic – have been sequenced. As a result, a wealth of information about its genetic machinery, protein expression mechanism (transcription, translation and post-translational modifications) is available. Over the years, various molecular tools have been developed for the manipulation of all these genomes. Various studies show that the transformation of the chloroplast genome has several advantages over nuclear transformation from the biopharming point of view. According to a recent survey, over 100 recombinant proteins have been expressed in algal chloroplasts. However, the expression levels achieved in the algal chloroplast genome are generally lower compared to the chloroplasts of higher plants. Work is therefore needed to make the algal chloroplast transformation commercially competitive. In this review, we discuss some examples from the algal research, which could play their role in making algal chloroplast commercially successful. 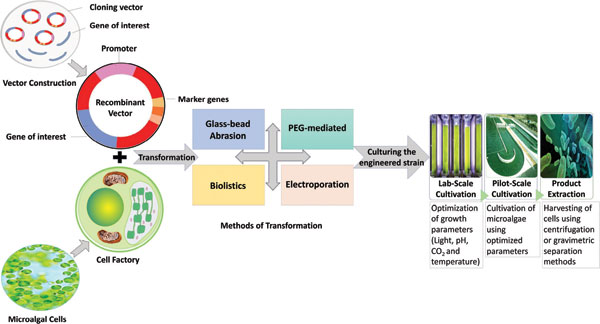